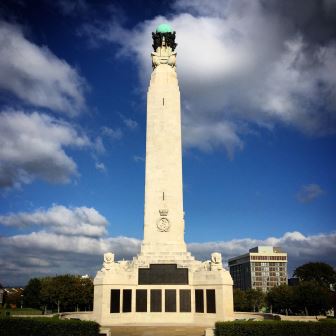 It is very moving to visit the memorial despite Alan being only a reference on a plaque and not having an actual grave. When you walk around the memorial in Plymouth there are always people around it searching for a reference on the walls that is relating to an ancestor. A slightly surreal experience as often your thoughts are interrupted by someone who cannot work out the method of locating a plaque and you break away to help before returning to contemplate your own ancestor’s life and death. Alan is someone I never knew but he is an Atherton, a good man and someone who went through horrors that thankfully have been spared to any of his family since that time.

My passion is writing about travel and particularly French travel. I have traveled extensively in France and wine and food has always featured on my travels and now in my books. My friends always await our return from France with the latest new finds from the vineyards and I was more than happy to keep sampling. I am from Lancashire in the north of England but have now relocated to Somerset (nearer to France) and able to enjoy devoting my time to writing and new discoveries. France came late to me as a destination, in fact so conservative was my travel upbringing that it was a long time before I even ventured to Cornwall. I have more than made up for the slow start and have enjoyed helping many others with their travel plans to France and especially to Paris and Provence. I have written a series of four books on France - Three are now on Amazon:THE FIRST TIME WE SAW PARIS about our first steps in French Travel, THYME FOR PROVENCE our discovery of that glorious region and the people and places we met and discovered, A DREAM OF PARIS a personal memoir of our times in Paris with friends. France has been fun, we have been burgled on our very first arrival, we discovered the best cafe that changed our travel lives on the very next day, we learnt about French wine, we escaped from the most horrendous gite, we found the best of gites, B & B's and people, we laughed and cried with dear friends in Paris, I was hosed down by a crazy owner to cool me down in Provence, our breakfast in a remote village was served by the French army, we stepped totally out of our comfort zone and discovered the best of French culture. The experiences are varied and many and please come with me as I retell the stories and my footsteps are there to follow. I am also writing about ancestry and genealogy and my first book about our incredible family story themed around war and the military is now on Amazon - A BULLET FOR LIFE. I love the English game of cricket, golf, soccer, photography, walking and cooking. Oh, and travel of course. View more posts