As it is time for the 2021 UK census this weekend I will post some Family history stories and I hope you enjoy them and find inspiration to check out your family tree.

This is quite a photograph in the context of my family history research. It is also notable this week in that the central characters, my parents, celebrated their 67th wedding anniversary. In the current covid-19 situation it was not possible to travel north to see them but for them this was another happy milestone in their long marriage since the above photo was taken. I have not of course researched their personal history. One absolute rule I have taken in conducting my family history studies is that nothing I find should ever impact adversely on or indeed change perception for any living member of the family. I can be comfortable in offering a few thoughts on the others and how they are important links for me.

For me this photograph gives me a direct connection with Victorian England. The distinguished man on the right in stiff collars which even then were extremely unfashionable is my Great Grandfather on my mothers side John Richard Parker. I met him and remember him well. He was someone that in Lancastrian terms would have been described as ‘proper’. This gives me a direct link as far back as 1874 when he was born in Preston, Lancashire. He would have met people that I found in my family tree that would have been alive from around 1820. If only I had asked him some questions but family history was not a big topic for a 10 year old back then.

John Richard Parker was a man who had some standing in the Preston community. He avoided the usual mill work by being a mill manager like his father before him. He was an outstanding footballer at the end of the Victorian era and captained Chorley who were and still are a leading club in English non-league circles. Back then football was not on TV so to see it you had to attend. The demand was such that teams such as Preston North End could not accommodate everyone in the area nor could everyone travel so non-league sides such as Chorley were vital to the community and attracted very large crowds. From newspaper cuttings of the time John Parker was a local celebrity. He also was an active member of his local church and played his part in civic roles such as at the Preston Guild celebrations. The contrast with my Grand Parents on the left, my fathers side, could not have been more different.

John Atherton was born into poverty. Sheer, desperate poverty in the East Lancashire mill town of Darwen some 12 miles away. The street – Water Street, Darwen – where he was born is now demolished but probably should never have been built. 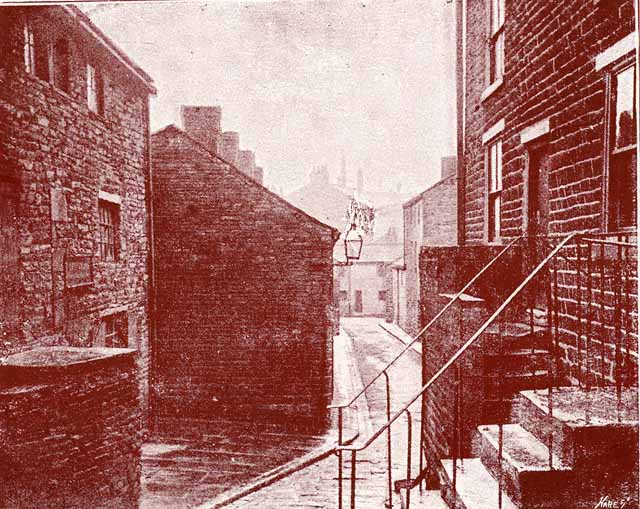 It served as a dormitory for the workers that were fed into the mill system in this Lancashire factory town. Water Street was a place of squalor, the worst of the many slum areas that these workers inhabited. It was a community of real poverty and suffering. John had a twin sister but she sadly died before reaching one year of age. That also of course meant my survival many years later. Such are the thin threads by which our lives are hanging. John’s father had a brother that also lived nearby. He and his wife had nine children – only one survived to adulthood. Water Street and the surrounding streets were places of petty crime, prostitution and drunkenness. John’s older brother was in prison for assaulting his cousin, an attack the five year old John witnessed. His attack on her tore the family apart as they were all living in the same cramped house. John came through all this and was instrumental in dragging the family out of poverty and into respectability. He was never well off materially but showed the family the way out of the desperate situation he was born into. I am grateful.

The World Wars did not impact on my mothers family. That was not the case for John Atherton. He was a lorry driver in the First World War which was surprising as he only stood slightly above five feet tall. He first of all lost his wife Sarah’s brother who died in a training incident in Ireland with his Irish regiment. I still have not discovered why he ended up in an Irish regiment but there must be a story there. Then another family member died at the Somme on July 22 1916 having survived the initial onslaught. However his greatest tragedy was in 1919 while he was still serving in the army. His seven year old son Roger was killed by a motor lorry as he crossed the busy main road in Darwen going home from school.

The school still stands but as you can see is now a motor accessories store. John had to return home to deal with this awful event.

Sadly, the unhappiness for John did not end there. He lost his wife Sarah and remarried in 1943 to a much younger woman. This I assume caused some issues in the family but they appear to live happily for another 30 or so years until John’s death. The wedding was marred by tragedy just days later when another of John’s sons was killed on the beaches of Salerno, Italy whilst taking part in the allied landings. He was just 19 years old.

I never met my Great Grandfather John. This I still cannot understand as during my research I discovered that I was 16 when he died and he was living just a mile away. As I said there must have been issues but any explanation has not been forthcoming but the important thing is to respect how the living view a situation. Maybe I will discover the reason but I can only feel it had something to do with his second marriage.

The lady next to John is Margaret Walkden, my Great Grandmother on my fathers, mothers side. I never met her. I have not found out one single interesting or controversial fact about her. Her three daughters were larger than life, happy people with wicked senses of humour. She would have lived a quiet unassuming life as a mother and a wife. She ruffled no feathers but she must have given her children a happy childhood and a good start in life. That is her achievement and no less worthy for that.

Their stories all lead off into more interesting ones either going back or sideways in time. They are a starting point for me in my research over the years and it has all been very enjoyable to find out.

John Richard Parker had a photographic album containing many studio portraits, cabinet cards, of his family that date back to the 1860’s. I now have them and they are a wonderful source of information and of great interest to look at and see what they reveal. The photo below is one of them and shows John in the Chorley soccer team in the year before he became captain. He is at 1 o’clock in the photo.

He left a mystery however in the album.

Loose in the album was this tiny portrait of a lady. 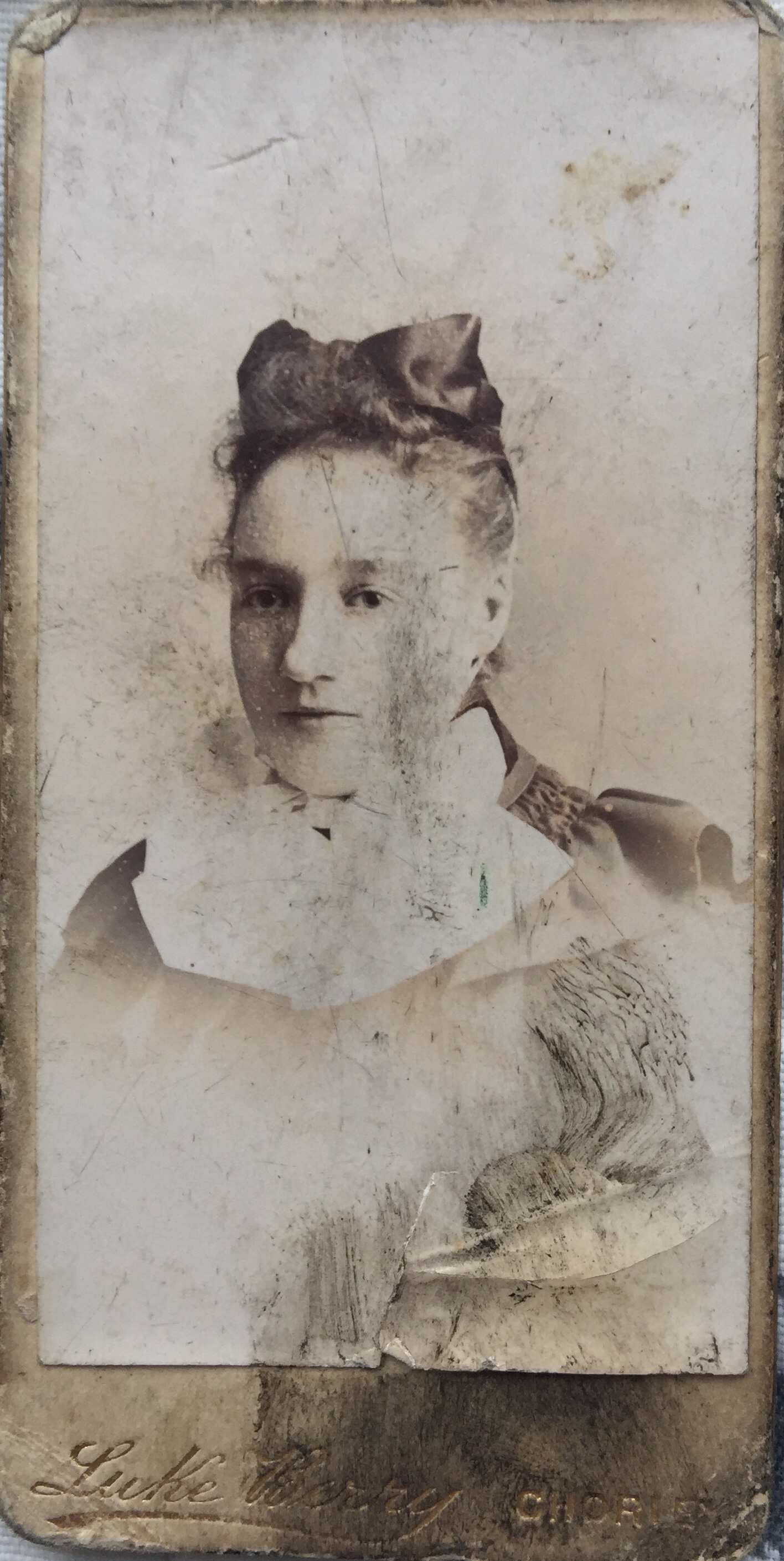 It was taken by the same photographer of the soccer team and he was only active for around three years as L.Berry. This was in Chorley some miles from John’s home in Preston. It has to have been taken at the same time as the football photographs of which I have three separate years. The lady is not his wife. The photo has obviously been well ‘thumbed’, perhaps having been in a wallet for many years. John was an upstanding pillar of the community, very conservative and conventional and a firm believer in the sanctity of the family life of the Parker’s. But did he have a secret? That could be so and it is one of the real fascinations with family research. You just never know what you will find – be careful what you wish for.

My passion is writing about travel and particularly French travel. I have traveled extensively in France and wine and food has always featured on my travels and now in my books. My friends always await our return from France with the latest new finds from the vineyards and I was more than happy to keep sampling. I am from Lancashire in the north of England but have now relocated to Somerset (nearer to France) and able to enjoy devoting my time to writing and new discoveries. France came late to me as a destination, in fact so conservative was my travel upbringing that it was a long time before I even ventured to Cornwall. I have more than made up for the slow start and have enjoyed helping many others with their travel plans to France and especially to Paris and Provence. I have written a series of four books on France - Three are now on Amazon:THE FIRST TIME WE SAW PARIS about our first steps in French Travel, THYME FOR PROVENCE our discovery of that glorious region and the people and places we met and discovered, A DREAM OF PARIS a personal memoir of our times in Paris with friends. France has been fun, we have been burgled on our very first arrival, we discovered the best cafe that changed our travel lives on the very next day, we learnt about French wine, we escaped from the most horrendous gite, we found the best of gites, B & B's and people, we laughed and cried with dear friends in Paris, I was hosed down by a crazy owner to cool me down in Provence, our breakfast in a remote village was served by the French army, we stepped totally out of our comfort zone and discovered the best of French culture. The experiences are varied and many and please come with me as I retell the stories and my footsteps are there to follow. I am also writing about ancestry and genealogy and my first book about our incredible family story themed around war and the military is now on Amazon - A BULLET FOR LIFE. I love the English game of cricket, golf, soccer, photography, walking and cooking. Oh, and travel of course. View more posts